“Earth” without “art” is just “eh”, claims the headline on SketchAR’s homepage.

But not everyone’s the next Picasso or Van Gogh. Not everyone can craft a masterpiece like the Mona Lisa – until now. Or, at least, that’s what this new augmented reality app hopes to change.

Augmented reality has become huge over the past few years – we only have to look at the mind-blowing success of the Pokémon Go app that integrated the user’s actual location with graphics from the game itself. The game was so popular that everyone from prime ministers, reporters, and law enforcement officers were all having a go. 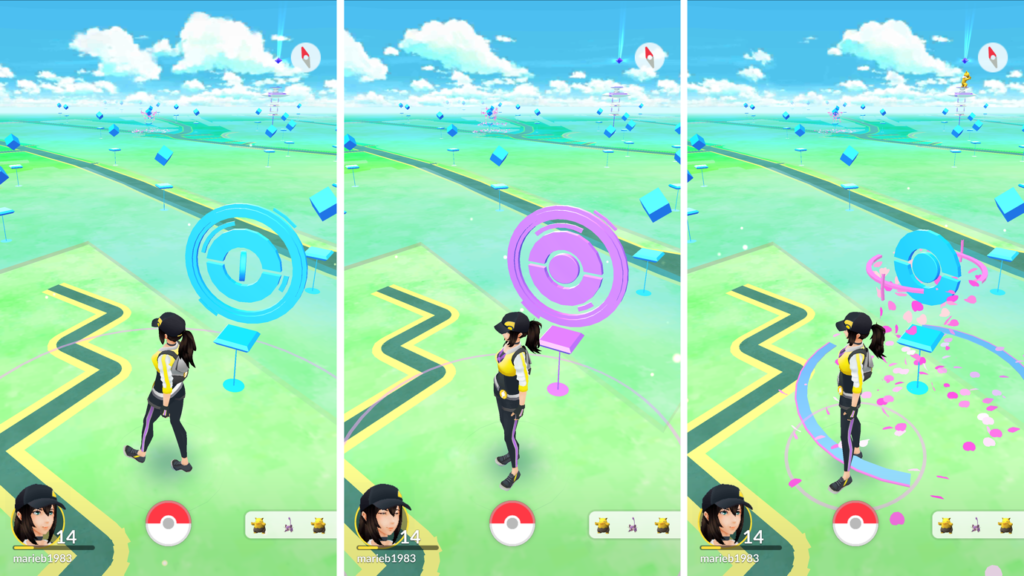 Bridging the gap between the real world and the digital one has become a huge trend in the tech industry, with multiple different types of apps and industries venturing into this crossover territory.

Today, AR is helping people do far more than just catch ‘em all. It’s helping them learn how to sketch, which is great news if even your stick figures leave much to be desired, like mine.

How SketchAR Makes an Artist Out of Anyone

The app works by overlaying a virtual image on a real-life piece of paper which shows up on the phone screen. Ideally, users need to get a tripod involved, as it can be difficult to hold the phone over the piece of paper in one hand while sketching with the other.

With a built-in selection of pre-made sketches, users can get started right away on perfecting their drawing skills, or they can upload and convert pictures from their own camera roll and turn them into traceable images. 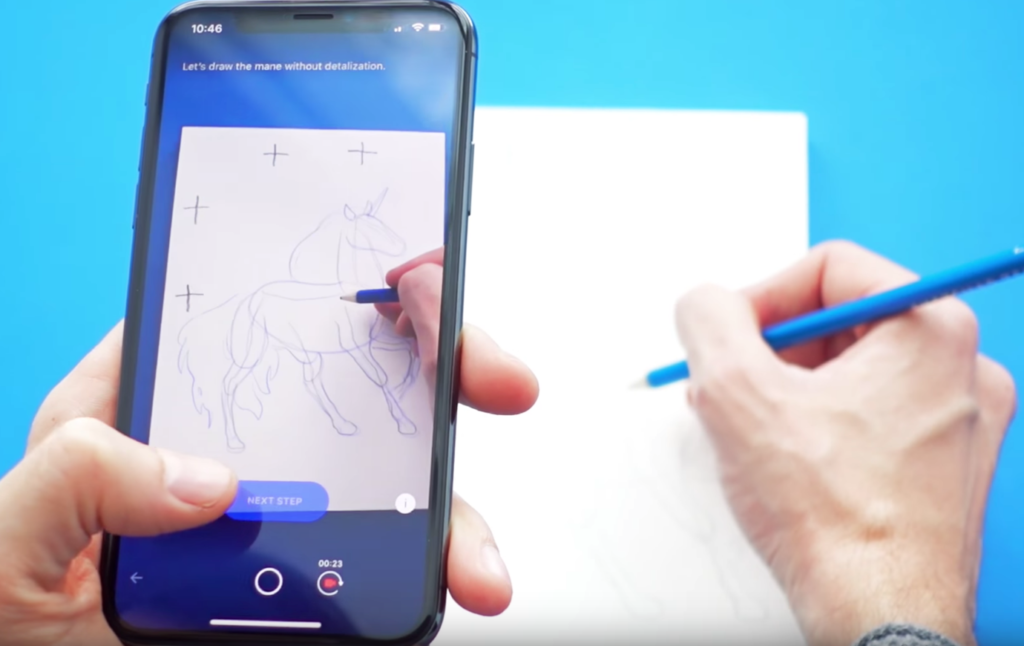 Then comes the fun bit.

Once the user has chosen which image they want to sketch out from their screen onto a sheet of paper, they need to draw five circles around the edge of the page so the camera can recognize the canvas.

After that, the image aligns with the five circles and displays on the screen, allowing the user to go right ahead and trace, draw, sketch, and be creative.

At the moment, SketchAR can only be used on A4 paper, but there are big plans on the horizon. Soon, larger canvases will be available as well as built-in sensors to detect a physical location so mural artists can get involved as well. 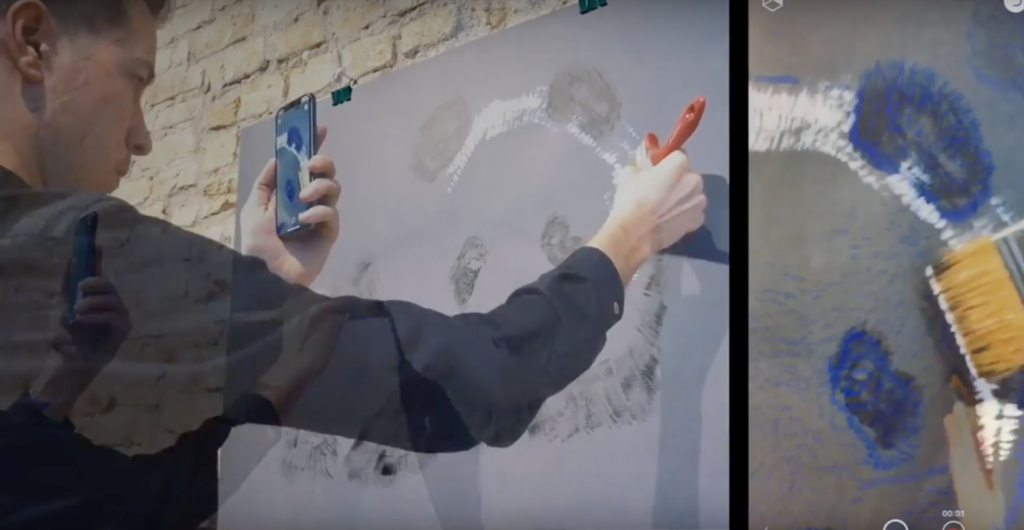 The Future of AR Technology in Apps

In fact, the first AR headset was developed by Ivan Sutherland in 1968 with the term “augmented reality” later coined in 1990.

It wasn’t until 2009 when AR was integrated with the internet that things got really exciting, though. 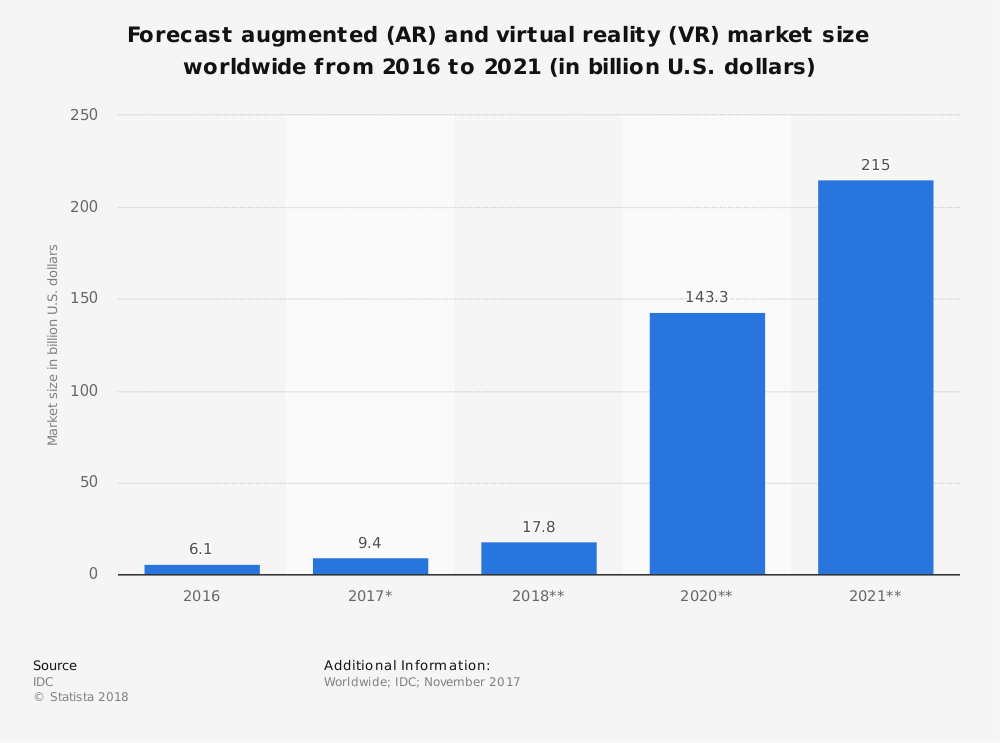 So exciting, in fact, that the AR and VR market size in 2021 is set to reach $215 billion – a massive increase from the $17.8 billion predicted this year.

While games like Pokémon Go make it easy to believe that AR is only good for entertainment purposes, it’s actually proving to be a huge hit in helping people develop new skills and advance in the workplace.

In a ISACA survey, 64% of US consumers believe that AR enhancements would benefit the workplace, while a further 69% believed that this kind of technology could help them learn new skills.

This is where SketchAR comes into play.

In the past, learning a new skill meant going to an evening class or taking a course. This equated to spending money and having to give up precious time, which probably put a lot of people off.

However, with the birth of AR apps like this, people can learn a new skill from the comfort of their own home whenever they want – it sounds like a win-win situation, right?

Most people would agree.

It could be argued that AR has opened up a new era for computing which goes beyond the limits of a small screen. Maybe in the not-too-distant future we won’t see workers at desktop computers anymore and will instead see them wearing headsets that let them interact with data and information in real-time right before their very eyes.

But on the flipside of this there are – as always – causes for concern. Just like there is with any new technology – especially ones that rely on mixed reality.

Because it is finely attuned to the real-world, AR usually has access to location information of its users. Take Pokémon Go again, which offered up different kinds of Pokémon depending on where the user was. This led to a spate of news reports about robbers who had used the game to lure unsuspecting players to specific spots to steal from them.

And, because AR operates in both the real and the digital worlds, there are concerns about the digital side of things, too.

The ISACA report shows that a large percentage of consumers are very or somewhat concerned that AR enhancements make their devices more vulnerable to privacy breaches.

It seems hard to equate hacking and data breaches with a seemingly harmless app that teaches people how to draw better. But when you think that new technologies like AR need new processes and new systems in order to keep operating at their best, there’s bound to be some pushback from the general public.

Sure, SketchAR may well make an artist out of you yet, but is that all it does?

If you want a quick and easy way to sketch a picture of your dog for your mom’s birthday, SketchAR might just be the thing you need. But with AR technology advancing by what feels like the day, we’ll be keeping a close eye on what it’s going to help us do in the future.

Because after all, once we’ve mastered the paintbrush like Picasso, what’s next?